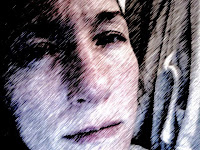 This is another story I wrote in college. Bon appetite.

I met Mary at the deli on Third Street. She was buying hot dogs. I was buying ham. She looked at me and asked me which were the ones I would buy; the ones with skins or the ones without. Before I could tell her I didn’t really care, she asked me about the cheese and pickled eggs, and told me about her tomatoes that she grew in the sun. She told me these things the way you would tell a friend. I listened while I thought of other things, watching her reflection in the glass that covered the meats and cheeses, the roundness of the glass elongating her neck like a gazelles. She talked to me about her tomatoes, and I wondered if a neck could work like that. In line to pay she came up behind me. “I got the one’s with the skins” she said. “Oh”, I said. What else could I say?

Sometimes I saw her other places. She would ask me things like: what do they do for fun around here? I told her I had never really noticed. She wanted to know where a good place was for her to take her car. I didn’t have one. How would I know a thing like that? Once at the Cafe she asked me what time it was. I looked down at my bare wrist. All I could think to say was that if I wore a watch, I’d always be reminded of where it was I’d rather be.

The Soap Bubble was the last place I saw her alive. She was eating crackers. She sat there, breaking them into tiny pieces, and putting the crumbs on her tongue where they lay like dry, brown snowflakes. She sat there with her tongue sticking out like that, just staring at her clothes. Once in a while she pulled her tongue back in and the snowflake would disappear. I watched her do this for a while, swallowing each piece like it was wet sandpaper. It made me hungry.

I asked her if I could have a cracker and she gave me the whole box. I took them and pushed them into my mouth, two, three at a time. She kept staring straight ahead while I chewed and swallowed. I stared at the box, trying to think of something to say. I reached my hand into the box and circled my fingers around a broken piece rocking it back and forth between my fingers and looked at her again. I wished I could climb inside with the socks and underwear that tumbled around inside. I wished I was under her car’s tires outside the front door, a sort of second page story in tomorrow’s news. I wished it were that easy. Instead I said, “good crackers”, and stuffed another one in my mouth as proof. I crushed it between my tongue and the roof of my mouth and waited. She didn't speak and so I said, “I hope your clothes come out really clean,” and left. I left her sitting on the table like that, watching her things, turning in circles.

The last time I saw her was in the paper. She was dead. The paper had a little picture of her and so I knew who it was; it was a good picture. A couple days later I went to her wake. I took my place in line with the all the others-waiting my turn to grieve. I nodded solemnly and listened to things like: such a loss . . . she was so young . . . such a tragic thing. I took it all in, saving those words for times when words would fail me. Finally it was my turn. I thought she looked just fine. Her hair was shiny, her clothes were clean, her cheeks were pink and full of cotton. She looked like she’d just been born. I touched her arm, the silk fabric of her blouse sliding over her cool skin. I wrapped my hand around her wrist and shook it gently. Wake up I whispered. I took her other hand in mine and shook her again. Wake up I said.