Kinda on a break 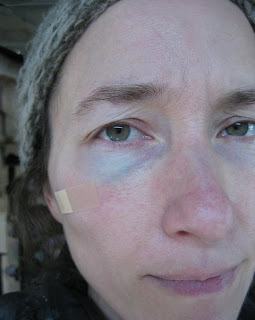 Well, without getting into the details I will be taking a bit of a break for a couple of weeks. I have recently had a body part removed and so I feel a little low key you know? This photo has nothing to do with the removal, but it is from an earlier accident and is reminiscent of how I feel inside right now. Once I feel up to moving around I'll get back to some work, but will be moving a little slow and small for a while. But I am doing lots of thinking about pots and hopefully will get back to work inspired with some great ideas. But for now . . . ouch.
No comments: 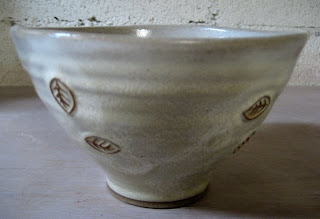 Okay, I promise not to post any more images of my work until I take some good photos. It's a lot of effort to get all the lights and all that jazz out and I am being lazy. For fun (you know how much I love fun) I will post this image again with a good image so we can see the difference in quality. Hopefully it makes this pot look much better because this image doesn't do it justice. This is one of the pots I brought to my jury. It is one of two. It has a great feel to it.
No comments: 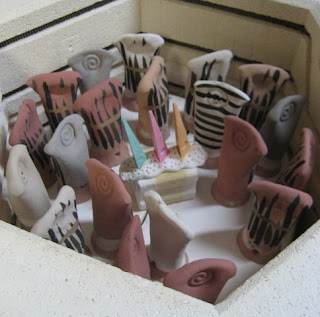 Did a little test firing the other day. Looking for a black stain to do brushwork on my pots with. I would post a few photos of some pots but my photo program is being difficult so I just don't want to deal with it now. Besides, as fun as throwing my time away is sitting at this computer I must go make some pots.
No comments: 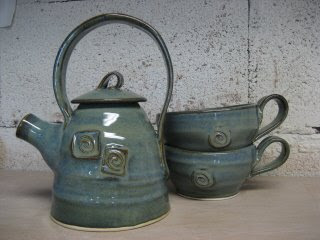 I hope I didn't already put this image up. It's kind of a cute teapot set. And for at least the time being one of the last of it's kind in my studio--something blue. Goodbye blue. You've been a good friend but it's time to move on to colors like white, black, cream and brownish. I imagine some blue-lovers out there are squirming in their blue-themed kitchens but trust me, it's all for the best.
No comments:

Well this will be my first post without a photo attatched, so for your viewing pleasure I will use different colors and you can mix them up and make your own picture in your mind. I have some pretty awesome news. As of aproximately 11:30 a.m. this morning I am a member of The League Of New Hampshire Craftsmen! I am pretty excited and this has probably been one of the best days of my life. It's given me a ton of motivation to keep working really hard and I feel like this is the beginning of good things. And remember my comittment to using only four glazes for a while? A long while. Well I meant it and to remove the temptation I am giving them to another potter. He is interested in trying cone 6 electric firing and I am interested in removing all temptation to say "just a pinch"-because when it comes to glazes I am kind of like a junkie. I'm showing amazing will power actually because these are not ugly glazes. But I am starting to believe that there is such a thing as too many options. Oh, I have more good news too. My own mother, Cindy Estano, is a knitter and makes felted handbags, scarves, belts and such and she herself just juried into a league in Maine. I don't remember the name - sorry. When she has her website set up I will post it here so all of you knitting fans (myself included) can check out her work. Congratulations Mom! 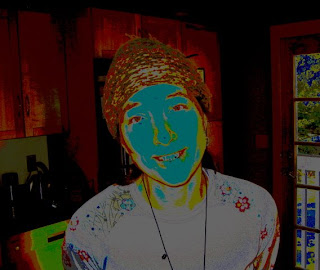 I tried to draw a sad face picture of me in paint but I could not upload it. So here is a picture of me as sad blue face. Since I was kind of smiling in the picture, you will have to imagine a frown and add some tears leaking from the corners of my eyes. Maybe picture a hankie in my hand. Then you will see how I felt this morning when I unloaded my kiln.

I am feeling better now.
No comments: 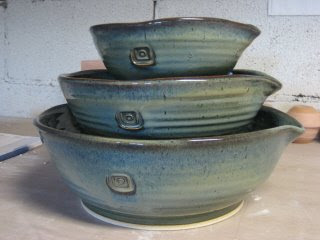 This is a nesting set of mixing bowls. They don't normally fit this way together of course, they are up on kiln posts inside the bowls. They are pretty awesome in most ways except the horrible glaze defect of PIN-HOLING!!!!!! that took them over. They are pin-holed so badly I am surprised you can not see it in this photo. However I love these bowls and so although I don't usually fire something a second time as I usually just throw it in my junk buckets I have decided to try and save these. I filled in all the pinholes with glaze and then re-sprayed them. I couldn't fit them in yesterdays firing however so they will have to wait.

My kiln is still cooling and around 1200 degrees right now. It is agony waiting since this is my last firing before my jury Friday. I don't know if I posted about my last firing, think I did, but I had some really nice pots. The entire last load was my earthy stoneware and this entire load is porcelain. I am pretty excited but also a little nervous.

So about the self-limitation. I have set an exercise for myself. For my next glaze session I have decided to limit myself to only four glazes. I think this is going to teach me a lot about what those glazes will do, and I am hoping by limiting myself, I will actually grow more and be more creative. Sounds like the opposite would be true, but you would be surprised. You gain more focus by removing too many options. I have about twelve glazes in my studio now, too many really but all glazes I liked at one time. I made a list and cut the list down to eight, then six, then four. It was interesting because my final four were always the first four I wrote on all my lists so they must be the ones my instinct is telling me to go with.
No comments:

Cones before and after 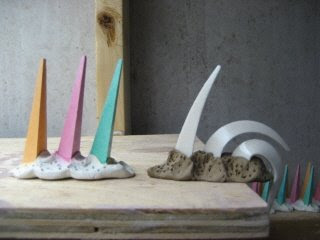 I thought this might be interesting for any non-potters who may be reading this. What you see in this photo are cones. Cones are used to visually determine what is known as heat work. What this means is that, it is not enough say, to say that I am firing to cone 6 so shut the kiln off at 2190 degress or so. There are variables that can affect the final temperature.

If you were to fire very slowly, you will most likely reach glaze maturity at a lower temperature, say 2184 degrees or if firing very rapidly, you might have to go to 2232 degrees to reach the same glaze maturity. It's not precise, there is no absolute temperature when your work is "done". This is where cones come in.

Cones are formulated to bend or melt at the same rate as your glazes. In the photo above (albeit backwards, I set mine facing the other direction in the kiln) the blue cone is cone 5, the pink cone is cone 6, and the orange cone is cone 7. So what happens is the kiln fires merrily along. As it approaches the point where cone 5 starts softening, I start paying attention.

I stop Seinfeld or whatever else I was doing and start watching what is going on in the kiln. (I have a computer on my kiln so I fire more or less on autopilot according to what I have programmed in, but I ALWAYS pay attention closely towards the end and am present in the end so I can manually shut the kiln down if necessary). Cone 5 is the warning cone. It means you are getting close to temperature. Cone 6 is the cone I am firing to. I want it to bend to at least 9:00, although for my taste, 8:00 or 7:00 is even better. Cone 7 is the witness cone or safety cone. You do not want this cone to bend too much. I like for cone 7 to just begin to get soft, because that tells me that cone 6 is fully mature, which means my glazes are fully mature.

It is a fine dance between the two sometimes. Cone 7 goes too much, and so do your glazes and then you have a runny mess on your shelves which will keep you out of your studio for months from the depression of it all . . . but I digress. The colored cones in the photo are what they look like before firing, and then they turn white during the firing. It is not a good idea to fire without cones. Lots of people do it. To save money, out of laziness because they don't want to make cone packs, whatever. There is no substitute for a visual cue to what is going on in your kiln. Use cones when you fire. Period.
No comments: 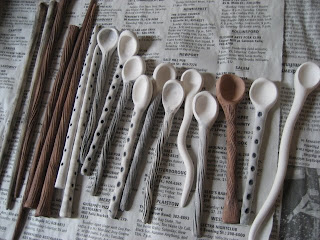 I wish I had more photos to put up . . . but I just don't. What I do have is good news however. My last firing was generally REALLY GOOD. I am really excited (I wanted to use the word phyced but not sure about the spelling) about things. It is taking me FOREVER to glaze my pots, but I am finally getting some results that satisfy me. It is certainly not the end of the road, but the beginning to a good direction now. I am firing again next Monday, and promise to take some photos and put them up as soon as possible. My jury appointment is next Friday, May 9, so that is my priority now, and photos will have to wait. It is amazing to finally have work that I don't want to throw in one of my THREE junk buckets of pots. But I have a lot of shards for some mosaic work someday, so a positive there too. So long for now.
No comments: