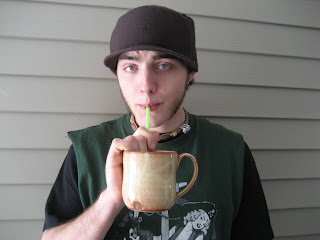 This is my son drinking from one of my earlier mugs. He's a wanderer and is currently on a journey where there is warmer weather. His preferred method of travel on his adventures is train-hopping. On this last trip they were discovered but not kicked off the train until they had reached a warmer climate, which I think was very kind. I try not to worry too much. People have to live their lives in their own directions.
No comments: 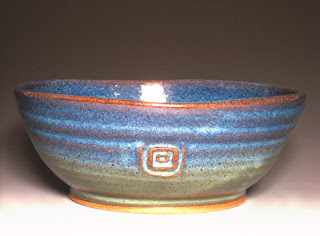 Every time I fire and every time I open the kiln I have new hope. I want to believe things are going to be better this time, that somehow I have learned enough from the previous firings that I'm going to open the lid and angels will sing. Usually the most I hear from them is off-key moaning. The very first test firing I did I had several fantastic results. I thought-eureka!! I am so lucky!! Many struggle for years to achieve the results I have achieved in just one small test firing (my test kiln is .8 cubic feet-a lot of excitement for such a small space). The reality was that those tests, miraculously beautiful on my little 2x3" test tiles looked dull, drab, boring and lifeless on my pots. It was a real awakening to the work ahead. 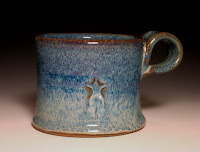 In each firing I often have weeks worth of work. Weeks of throwing, trimming, handle attachments and multi-step glazing, and in no firing to date have I really loved more than 10% of the pots inside. I know as a potter not to have preconceived ideas of what to expect. Despite the best planning the kiln has it's own ideas. But still, I have hopes. And so I grasp at the little guys that grab my heart. I cling to their beauty as reason to move on. I examine and analyze them like I am trying to figure out how to split an atom: why did this work on this pot? but not on this one? Why is this pot so beautiful, and yet this one glazed EXACTLY the same is . . . just . . . plain . . . ugly.? And I still don't know. I will enter the next firing with the same hope and the same reservations. I will put those beautiful pots into the kiln and say goodbye because I know I may never see them with the same beauty again. 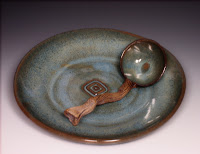 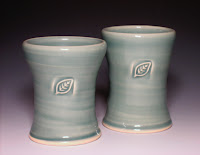 Pots above from firing on 2/25/2008. The beautiful little guys, who are still beautiful.
No comments: 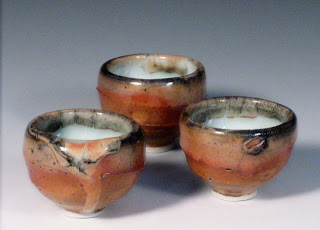 These are three tiny (about one and a half inches across) pots also from my time in college. They were actually part of my thesis show to earn my BFA. They are glazed with "Shino" on the outside, and "Celadon" on the inside. The firing that these were in was the first time I was completely responsible for a firing.

The kiln held about 30 cubic feet and was gas fired (as opposed to the electric kilns I use now-although I hope to change that one day). I had a lot of pots in this kiln, and a lot of other peoples pots. Most of my pots were glazed with different Shino's and Celadon's (there are countless recipes for each). I had done a lot of research and learned that to really get a good firing, I needed to reduce (I can explain that later) like crazy. We normally fired pretty conservatively at my school, so this would be a different firing--and one I was doing alone.

So long story short I fired the kiln, about three days later (it takes a long time for a kiln that large to cool) we opened the kiln and I had my mind blown. It was spectacular. I could not have wished for better results and I was ecstatic and relieved since I think it was my last firing before the show. I learned a lot that day about taking chances with my pots. It is much easier to play it safe and not risk loosing any but also far less exciting, and you don't learn much that way.

Reducing is a method of firing whereby you intentionally starve the atmosphere inside the kiln for air. There are several ways to achieve this depending on how you are firing, but one large component is closing the damper down on the kiln, much like you would on a woodstove. It can be pretty exciting because flames will shoot out the peepholes of the kiln, or out the chimney in an outdoor kiln. The sight can be pretty impressive. As the atmosphere is lowered in oxygen the fuel now starts looking for oxygen where it can get it, and so turns to the glazes which causes them to change colors and create effects in all sorts of interesting ways. That's the short scoop anyways.
No comments: 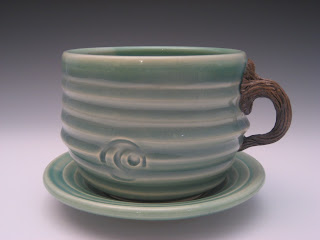 
I am learning to take photographs of my work. This is actually quite difficult for someone not trained in photographing small shiny objects. There is a special paper to use for the graduated background behind the piece (have you ever paid almost 40$ for a 2x3 foot piece of paper-now I have). 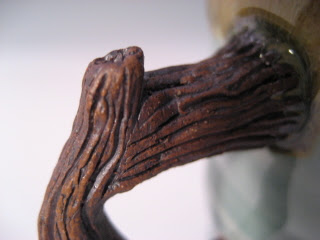 (detail of clay handle made to resemble wood)

After pricing photography lights I improvised my own by taking two eight dollar clamp lights and duct taping them to two inexpensive camera tripods (total cost per light about 18 dollars versus about 150 dollars). This actually works pretty well because I can control the height and angle of the light. To diffuse the light I taped parchment paper over the ends. Voila! They aren't as pretty as the other ones but they do the job. Sometimes you gotta do what you gotta do.
No comments: 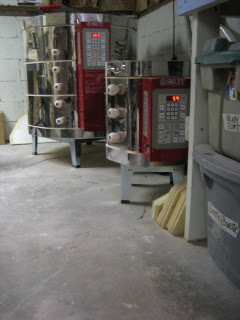 The studio I now occupy is technically the third studio I have had. While still in college I took a small room and with lots of help, converted it into a moderately functioning studio. Unfortunately I never hooked my kiln (a used 7 cubic foot bought used) up, and had to transport all my greenware to school to fire--which is not fun. It would be the first of three times I have had a studio that I did not fully take advantage of, and after a while, we converted into a nice bathroom.

My second studio was a massive space, at least 800 square feet in an old defunct woolen mill, but after a year and a half or so there I had the brilliant idea of moving my studio to my home. This has it's advantages and disadvantages. It is wonderful to be so close to your work and not so wonderful to be close to so many distractions. It is in my basement and during the winter, even with a 220 volt space heater I installed, can be very cold and damp. My fingers are so cold sometimes I loose dexterity in them. I work in a down vest and a thermal shirt layered under another shirt. But I am very lucky to have this space and also sad that so much of the time since we created it I have not used it enough. There is the draw of a steady paycheck working at a "real" job outside always calling me, and I usually listen. 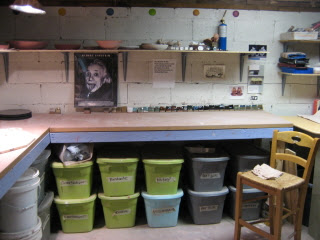 Notice the temperature on my kilns-it says 59 degrees. There must be some magic climate inside, because it feels much colder out here.
No comments: 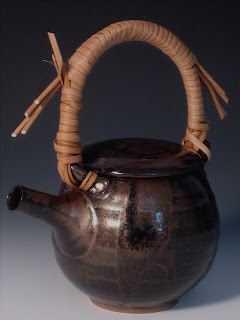 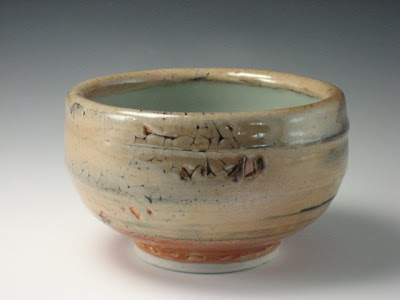 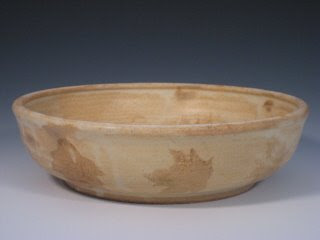 Bowl I made at Laconia Pottery during my 20's.

I have many new beginnings, almost daily I am starting or finishing starting something, making pottery included in those failed starts. With each attempt I inch closer to becoming a "real" potter. If you would like, follow me in this journey and I hope you enjoy a pot or two along the way. I promise not to inundate you with photos of cute kids and sunsets, although I can't promise my dog Daisy will not make it into a few shots. The other day my fortune cookie said: you will be successful. So I guess I can't lose now.
No comments: