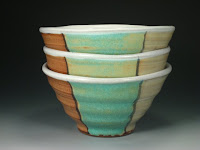 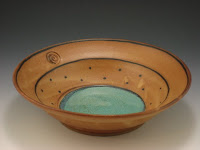 I just thought I'd put up a quick little note. I'm not really sick anymore-still feeling a little light-headed though. We spent the day at the fair yesterday with my grandson eating french fries, gyros and ice cream. Petting the sheep and such. It was drizzling out most of the day but really didn't start raining until we were leaving. I was hoping to get into my studio today, but we won't be dropping the little guy off until 2:30, so probably not much will be done in there. We're going to stop on the way and do a little apple picking. Hopefully I will have some photos of a new batch of work soon. I'm still waiting to hear about approval of my second shipment of work to the league. Well, I'm just sitting here trying to think of things to say, so I guess there's not much worth writing about today so I will end for now.

nice bowls, make me think of lime sherbert for some reason

It's apple time here too. The place down the street from us has been bringing in their apples all week by truck and trailer load. Have fun picking apples. Love your bowls.

The bowls look great!. The variation you're getting in the glaze at the top of the bowls (in the three-bowl stack) is really pretty.

Thanks every one-this pattern and combo of colors are one of my favorites.