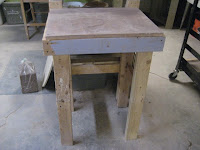 So I have this sorry looking little wedging table. It's not very big, but it's main problem is it's ugliness. I've been wanting to revamp it for a while and since while I had been feeling sick I was not feeling creative in the pot making area, I thought I would give it a go. It originally had a canvas covered, plywood top. This annoyed me because once the canvas stretched out over time, it would bunch up while I was wedging. I've taken the top off and restretched more than once. Enough is enough! 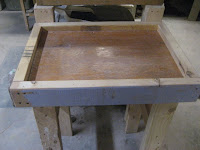 So I decided to turn it into a plaster topped table since I already had the plaster on hand. I took the top off, cut it to fit into the frame, lowered the legs and dropped the top in. I had intended on making the depth about 1 1/2" so the table wasn't too heavy to move around, but forgot to take into account the depth of the plywood, so it's really only about 1" deep. I figure as long as I don't clog dance on it, it should be fine. 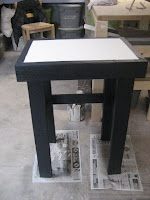 I had some paint kicking around and so I didn't even need to spend any money there. The dark paint is left over from my son's room when he was still living at home. It was so bright and cheery in there. I couldn't resist the next little touch. 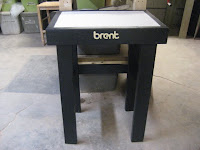 I hand lettered the logo, with paint leftover from the trim in our house, and I have to say it looks really awesome. I keep laughing when I look at it. We had a Brent slabroller in college, and it was a great piece of equipment. Now I have my own little piece of Brent! 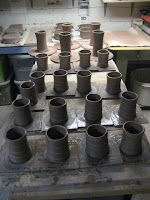 Here's some mugs in the front and some bird feeders towards the back. Tomorrow my pugmill should arrive! I am so excited! I probably won't be able to get it into the house until Adam gets home, so I will spend the following day learning how to use it and recycling my clay! Peter and Brent will be so happy together.

What a transformation! Your wedging table looks great! I hate using canvas - it bunches & stays filled with clay dust.

Aren't you jazzed about your pugmill!? What a great piece of equipment. Warren MacKenzie said this past weekend that his pugmill is his favorite tool and that without it he wouldn't still be throwing.

Awesome. You had me fooled! Now get some clay on it! Congrats on the new pugger. Can't wait to see it!

Congrats on the new men in your life- I hope they get along well.
Having a pugmill is a great way to keep the clay from piling up. We use a plaster bat next to our wheels and throw all our scraps onto it as we throw. The next day or so- this is usually ready to go through the mill.
We rarely have any wet clay hanging around- taking up space.
M

I'm still getting a kick out of the way it looks. I have to say it fools me as well. The lettering doesn't look bad -as long as you see it from a couple feet back. I won't be posting any macro photos of it! I like the idea of throwing scraps into a plaster trough. I never thought of that before.

I like the idea of having a little slop trough. Since my clay is so short, I save all my fine slop from throwing and ribbing and use it for handles. I's usually finer than my trimming scraps, which I though into a thirty gal. can. When I'm in high gear I go through two 30 gal cans in a session. I put the wet slop on my plaster bats and when is just dry enough to peel up I run it through the old pugger.

You are such a resourceful woman! I am really inspired by your can-do attitude. It's awesome!

Deborah, what a great job - that black paint really makes it pop - Brent - ha ha. Does the plaster expand when you fill the depression in the table? And did you have to level it off - like screeding concrete? That looks so nice I might have to borrow your idea. thanks.

Thanks for your comments everyone, and Linda, no, the plaster does not swell up. You just figure the volume of the area you want to fill and calculate the quantity of plaster for the area. I pour when it can still self-level, but then used a straight edge to screed the top.

Thanks Deborah. You are so handy around the shop, you're an inspiration for me to do more.

I have a slide rule for mixing plaster for most every volume and shape. It tells you how much water and plaster you will need. You may be able to get one of these nifty devices from US Gypsum or some plaster supplier. I haven't looked this up online, but it is one of my most treasured tools.

Thanks Linda. When I am sick, or not feeling very creative is a great time to work on these often unneccessary but fun little projects.

That sounds like a fanastic tool Michael. I had to spend an hour looking for the formula to determine the plaster I needed.