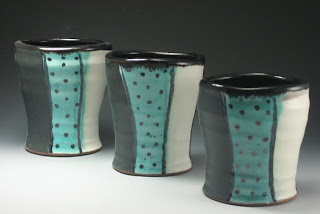 I had the same issue with the washed out black on these tumblers. But I hope to have better luck next time with what I'm learning from the book. 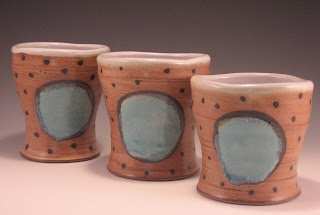 Three more tumblers. I love making tumblers for some reason.

The thing I like about South Park is that they make fun of everything and everyone, and like it or not, sometimes they are dead-on with the views they present. They spent an entire episode mocking what can easily be seen as the ridiculousness of blindly believing in the story of the beginning of Mormonism without questioning. However, they also end the episode kind of saying, but hey, we should all tolerate each others beliefs. I'm probably telling you what you already know, but they make fun of every religion, every race, every idea of sex and what ever else might be out there.

So when the episode "Trapped in the Closet" satirizing Scientology came around, no one should have been surprised, or any less, or more offended, than by any other episode. Certainly not Isaac Hayes, who for nine years had no problem participating in a show while they mocked every other religious belief. A few months after the episode aired, he asked to be released from his contract with the show because he felt that making fun of someone's (his) religion was intolerant and bigoted. I personally think he was being a hypocrite (no offense to his memory or him personally) , but it was his choice.

Enter Tom Cruise (also a Scientologist) who was portrayed in the episode. Now this next detail is why I lost a lot of respect for him and began a two year boycott of his movies (I still haven't seen MI 3, although I love Philip Seymore Hoffman and wanted to see it for his performance alone). Cruise took his outrage to another level. He threatened Paramount saying that unless they agreed they would not rebroadcast the episode that he would not promote the MI3 movie. This just really bothered me, because anytime I see someone trying to promote censorship it just outrages me-a good topic in itself for another day.

So the other day we went to see Tropic Thunder, a movie that has had it's own share of criticism stemming from jokes at the expense of people with mental disabilities. I kind of cringed at some of the things said, so I can see why some might be offended-some people were also outraged because Robert Downey Jr. was playing a black man (which by the way he was great in-as usual). But I'm digressing. The surprise performance in the movie was by none other than Mr. Tom Cruise himself. If you don't know he's in this movie going in, it might actually take you a minute to realize who he is. He does a really great job with his character and I found myself enjoying the performance, and thinking it was time to let go of a grudge. We are all, after all, human, imperfect little people, and even the super-humans like Cruise sometimes do and say regrettable things (regrettable in my opinion anyway).

So I think I will finally rent MI3, and get on with my next boycott. If I could only stop eating meat and cheese again . . . talk about a hypocrite!

That's too funny that you were boycotting Tom Cruise--I was too! But, for a lot of reasons, mostly because he's a nut job. Anyways, good luck with the photos!

You make me laugh -- I'm always boycotting something too. My husband says -- who are you hurting with this boycott!? Like my little humble opinion will change the world - hey - it changes my world!
Your tumblers look great!

Interesting discourse on Tom Cruise and South Park. My son is an animator/cartoonist/storyteller and very irreverent about damn near everything. Sometimes it appalls me and cracks me up at the same time. He's an adult now so I just smile and think "Wow, he sure does think for himself."

I like the black tumblers... The way the black breaks at the top. The contrast between what looks like matt on the outside and gloss on the inside... You don't like them?

Hi Deborah, I love your tumblers. For the black one is the black supposed to be shiney like the liner, but it came out more matt in the photo?

He has developed a bit of a reputation as a nut job hasn't he Ben? He's either brought it on himself by being a little too "Michael Jacksonny" or maybe we as the public are just a little too critical. Probably both.

Sadly I gave up believing I could change the world with my boycotts Judy, but when I do actually practice what I preach, I know I feel a little more peaceful inside anyways-I guess that counts for something.

Patricia, your son and mine would probably get along well. He's brilliant, creative and has no problem expressing very disdainful and passionate opinions on most matters. Sounds like someone else I know . . .

The black glaze on the outside of the pot is a matte glaze, so that's not the issue. The problem I'm having is getting it to photograph well, without looking really washed out as it does in this photo (due to polarized reflection I believe). Although the black is sort of on the charcoaly side, it is photographing much lighter. I just want to get an accurate reproduction - I have a couple of things to try.

Thanks for everyone's comments!

hey deb, I likewise enjoy a personal boycot, I boycotted any self viewing of the olympic games on tv in a personal protest for the disenfranchised and plain aggression of the chinese against the tibetan people.. all done now! yey for the boycot..

Boycotts are good! I have a couple myself - Walmart (drives my inlaws, mom, and brother crazy), American Furniture Warehouse (oh I know how to hold a grudge - going on 12 years now), growth hormones in milk and poultry, and on and on... I'm trying to think whether or not there are any actors whose movies I won't go see. I'll have to think about that one.

I love South Park, actually any comedy that takes no prisoners. Family Guy is good - I am still surprised that this one is on network TV. I sort of remember getting ticked off at Tom Cruise for suggesting that postpartum depression was a crock. I shook my head and was wondering what Tom's credentials are that gave him that authority on the topic.

Anyway, your new work looks great! I especially like the "girly look" of most recent post. Your color combos are fantastic.

Ang-if I had cable I would have made the same choice. Not only because of the human rights abuses in Tibet, but the abuses against the Chinese people in preparation for the games. I wish that our own president had set an example by boycotting the games himself, as well as some of the athletes. I'm not in their shoes though, so it's easy for me to say that.

Cynthia-if you haven't already seen it, watch the movie "Walmart, the high cost of low price". I think it will strengthen your resolve against Walmart.