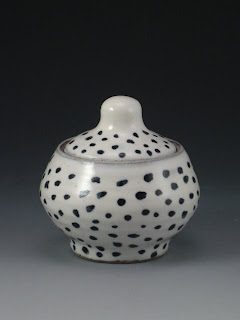 A mind numbing, finger cramp inducing, shiver producing cold that has sunk deep into my bones. I have been cold for days and my only respite is late at night, pressed against Adam under the covers. I jumped in the shower this morning; my sole intent being raising my body temperature. After a moment I remembered that I had hot tub in my back yard and so climbed out of the shower and into the 102 degree water which I raised to 103. It's a strange feeling, soaking in hot water, shivering inside. After 15 minutes I finally felt warm again.

It's five o'clock now. I'm sitting on a heating pad, eating a bowl of black bean soup, not because I'm hungry, but because it's hot (although I seldom need the excuse of hunger to eat) and drinking another cup of tea. I am determined not to turn the furnace on yet. We pre-bought 650 gallons of propane, although I told Adam I thought we should buy 750. If I turn the heat on now, we will never make it through the winter and will likely have to buy more when the price is at it's yearly peak.

Sadly, to try and cope with what has become a frightening heating bill in the winter, we have decided to shut down the master bedroom, which has it's own bath and move into the guest room. We plan to put a damper in the ductwork to stop the heat from heading to that part of the house. Our house is not large, and this will effectively remove about 1/3 of our living space. It is however, an enormous heat drain, being the coldest room in the house on any day. I am assuming they used paper towels-of the single ply variety-to insulate the walls.

And so it is time to get the crock pot out again. For anyone who missed this post the last time, Adam once had the brilliant idea of using a crockpot for my water bucket and it really helps. So will this heating pad under my butt which is coming downstairs with me now.

I am dreading the winter heat bills also. Make sure your are cautious when closing off part of your house for the winter. I did that a few years back and ended up with frozen and busted water pipes. Loving your blog and your pottery.

I'm sitting here freezing, too!! Shivering and my fingers are so cold it hurts to type! I'm not giving in yet though...the days were so warm here but the house has gone cold and it's not going to warm back up I'm afraid until I decide to start up the heat. Electric blankets are the best invention in the whole entire world! I go through a lot of hot tea during the days....coffee in the am and tea the rest of the day until I sleep!

Well, even here in the sunny south it is getting cold in the evenings. We live in a house in the woods, which is great in the summer. I have a trick for cold toes. I use a sock filled with rice- tied up on one end- heated in the microwave. Toss down at the bottom of the bed and stuff your toes inside. The original use for this is for sore shoulders or backs- but every winter I use this for cold feet. Two and you can wrap one up next to you. I try to laughingly keep this sock on my side of the bed- even when Mark tries to stick a foot in!
Another trick is to use a hair dryer inside your shoes before you put them on. We like to pinch pennies around here and those heating bills are going to be scary this winter.
M

Nice pokka dot pot. I am trying to find out why my blog shows as posting 6 months ago on yours, being fairly new to blogging, I am at a loss but have several emails out to see what the process is to correct this. Got our first rain to day hopefully will be many more to come.

that is a great little jar! looks like the chickens have been in your studio splashing slip on your pots. hahaha.

I used to used an aquarium heater in my big 10 gallon bucket. It's very efficient. I may have to hook it up my new shop. I'm not sure what kind of overnight temps I'm going to have. We'll see.

Hi Deborah, this is a test for me to see if your blog read list shows my blog as reading your blog today rather than 6 months ago.

wow, there's some great ideas in these posts. I never would have thought of an aquarium heater, but that's a great idea. That way it keeps the water around a constant 80 degrees or so I think. I have to shut my pot off occasionally or I would be making finger soup.

I was going to mention about your blog Linda. I forget to check it a lot because it gets forgotten at the bottom because it's not feeding. I'll check to see if it's working now. I'm trying to set up blogreader but now I just check posts from my own blog.

I have a sack my parents gave me filled with flax seeds I think. I keep it in the freezer but it is meant to be microwaved as well. I think I will finally try that and maybe even curl up around it at night.

I was thinking yesterday of getting a heating blanket. I wonder now, with the rise in fuel, if it is more economical to turn the blanket on, and keep the thermostat down. At least there is a constant heat right next to your skin, instead of warm air disappearing into the walls.

If/when we shut the bedroom down we will drain the pipes and such. My studio is directly under the bedroom as well, so there should be some residual heat. But I should think about it, because our washer and dryer are in a space off the bedroom as well. It will be chilly doing laundry!

We've still got really warm days here in Atlanta -- nights are down to the 50's though. I'm not looking forward to winter either. I don't have running water in my studio. I use the outside hose during warm months. The aquarium heater is a great idea! And I have a friend who spells that 'propain.'

There must be something going around with blogrolls. Your blog hasn't been updating on my bloglines.

Hope you get to feeling better! And good luck with the heating this winter. Nice little pot by the way!