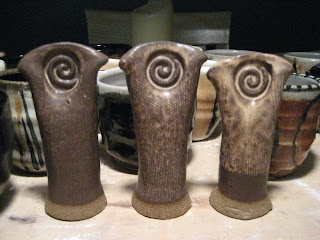 Something's wrong with the glaze on these test pots above 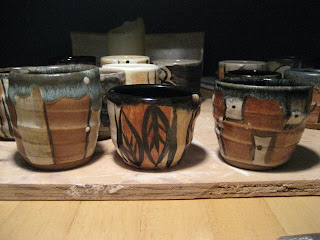 The orange on these pots is how it should be.


I just learned a really valuable lesson. The orangy glaze above is a glaze I have been using. It's orangy when thinner, and creamier as it is thicker. Great versatile glaze. I made up a new batch and as an afterthought decided to test it in my last test firing on the three vertical test tiles above because I had used a new batch of yellow ochre. (I hadn't glazed my little test pots with it thank God). As you can see there is a radical difference here, and not a happy one. Something is very wrong with the glaze which is a drag because I just made about 4 gallons of it.

There is a belief floating around that you should always test a new batch of glaze (even if it is a glaze you have been using for a while) before committing a lot of pots to it and I never do. Once I have done my preliminary tests I trust my measuring and mixing and just remake the batch when it is low and continue on. Due to my own stupidity I screwed up the calibration on my larger scale and I think this test is the end result. I use digital scales-which I love-and am very meticulous. But I think this event has changed my plans. If I had committed an entire large glaze firing using this glaze I would be in some serious emotional pain right now.

So I have ordered a new scale. What I really need to do is just re-calibrate the one I have but the 5 kilogram weight to recalibrate is 42$ plus shipping on a 12 lb. item. I can buy exactly the same scale I have for 35$ with shipping included. The power button on my scale was difficult to turn on sometimes so I just decided to go with a new scale. I am going to do a small test with the old batch of yellow ochre and the new batch of yellow ochre just to be sure it is not that, but I really believe it is the scale.

Take note: randomly pressing buttons together to see if you can figure something out is not as wise as taking the time to read the manual. So huge lesson learned. I will always test new batches of glaze from now on even if I have been using them for years.