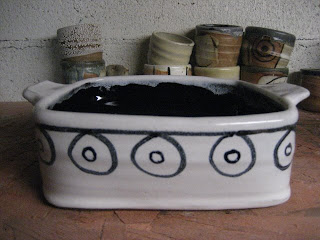 Well, I've been reluctant to come back to post because I am feeling a little down about my last firing. I had a really high failure rate. Failure, as in the sense that, I thought a lot of the stuff came out kind of ugly. I also put the turquoise glaze on too thickly on some pots and had some shelf stickies.

This black and white casserole I think is kinda cool. It could be more interesting though. One thing I have learned is that for this to look good- the black liner with the white outside- the white needs to go into the pot over the rim, instead of the black liner being outside the pot over the rim. It just looks like wet black paint, kinda hanging out on the outside of the pot the other way. Obviously glazing in this manner of having the liner glaze stop inside, just adds a lot of messy work. 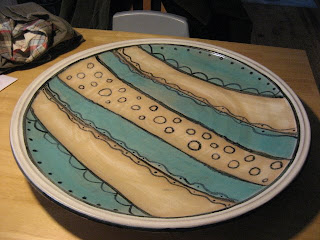 This platter is probably one of my favorite things from the firing. However, it is not presentable because there is a small s-crack on the bottom, and the blue glaze is really pitted if you look closely. I forgot to take a picture of the bottom. Wait a sec. 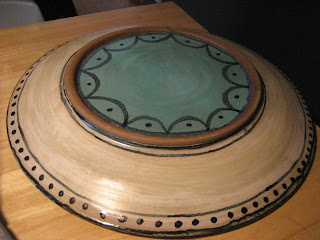 My square plates came out okay. I'm not jumping up and down over them. I wish I had put some deco on the white stripes.

I am in a bit of turmoil right now. I need to reassess the direction I am moving in. I spent way too much time on making and then glazing (days) to have such a small success rate. I haven't worked in my studio for the last two days and don't plan to today. I'm just tryin to get my mind straight around all this. Well, I might go in and load the bisque, but then what? Spend another few days glazing that bisque to loose most of it to ugliness? I'm getting a little tired of that.

So on a different note, my first yoga class the other day was a Vinyasa Yoga class, it's like more aggressive, active movement class, and it KICKED MY ASS. I have been sore for days now. I went back last night and took another class, a normal yoga class hoping it would loosen me up. I am enjoying it however. It's kinda nice gathering with a group and practicing together. Melissa the teacher is really great too. She adjusted me a couple of times in a pose, and she doesn't just come over and move you and walk away. She comes over, and gently lays her hands on you, and you can kind of feel her assessing what needs to change, then she wraps her arms around you and presses you gently into position, and then stays there for a few moments holding you there. I swear you can feel the energy coming from her, and as soon as she puts you into position, I can feel that it is right now. Interesting.

I have been back to the Obama headquarters three times now. Yesterday we were assembling all the literature that you come home and find stuffed into your doors, only to toss into the garbage. So the next time you begin that toss, think of us, the little volunteers, our fingers raw and bleeding from stuffing them all together, and set them in the garbage gently. 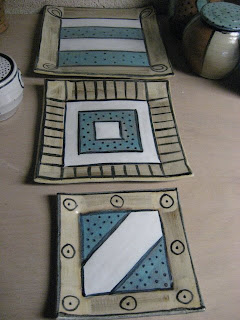 I like the platter a lot -- and the square plates! You are doing the right thing by just staying away from the studio. I find when my intention doesn't happen - if I walk away & look at everything with a fresh eye a few days later, I'm not as disappointed.
Your work is moving in a very good direction - think of it as a learning curve & keep working!

prob just a bit of tweaking needed application, thickness of glazes and firing, after a while you get to know your glaze quirks and causes... take your time yoga sounds like a great idea-happy pottingg

Sorry Deborah, you must be feeling really fed up. Ang is absolutely right though, it's all about learning about one's materials and getting it wrong is all part of moving towards getting it right. S cracks are such a bore - I get it a lot on flatware - drives me crazy. You have some lovely decoration there, that's the hard bit, and you know all the answers to refining the process and materials - keep the faith!

ok, I had a whole comment and it disappeared - I hate that - now I am trying to remember just exactly what I typed, so I don't have to think again, getting kind of tired.

Well these are not ugly by any means at all. I love your square plates, your round plate and your casseroles. I love the fact that you have a design on the bottom of the round plate, what a wonderful surprise for someone turning the plate over. Your designs are very cohesive and work well together.

I agree about the black and white on the casserole, what about a color other than white with that particular one? Lots of folks really strive for a shiny black glaze and you have a wonderful one there. How did the casserole come out which you posted in the previous post - the one with the vertical striped bands? What color did you put in the interior of that one?

Judy has some great advice about stepping back and taking a fresh look a few days later. I like to take photos of my work and then look at them on my computer screen a few days later. Then I "see" different things about them.

Fingers raw and bleeding - man - now I can't throw that stuff out without feeling guilty, thinking of what you said.

Hi Deb - Just wanted to be one more voice in the wilderness. Keep the faith! I can so relate to your frustration over working for days and not getting the expected result -- again. However, I gotta tell you that I'd be VERY HAPPY with those square plates. And, the deco on the platter looks great. Love how you approached the underside... It does often feel like we get one thing down and another aspect of the process goes awry. Grrrrrrr. Well, if it were easy, everyone would be doing it, right???

Thanks a lot for the encouragement everyone. I really am re-assessing the direction I'm going in however. I think I'll write about it in my next post.

I also understand how disappointment can set you back having been there myself. Load a bisque and take another go around.

Stay warm too - I confess I turned on the heat last weekend when it got down into the 30's outside.