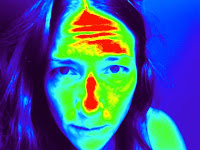 Great little story, but it clearly indicates that your man selection software is in serious need of an upgrade unless you need the fucked-up-ones as fodder for your literary musings. How do you find them?

Lol . . . I know, believe me know. I'm working on it! Thanks for reading Mr. Anonymous.

hi deb,
funny post, or should i say frightening post. i love these kind of stories because it supports my belief that we are all fucked up in some way that to others seems really weird (except the guy not letting his dog drink is a new one to me). i have my own but the litany of dating gone bad reminds me of a young woman programmer that worked for me/us in another life. her weird thing was that she was a programmer and approached life problems and, in this case, problems of the heart, in the manner she approached a coding problem. anyway, at age 29, she came into my office and announced that she needed to get married and had signed up on match.com. she told me that her system would be to go on a date with the first 3 guys that contacted her and the best of the 3 she would date and eventually marry. the funny thing was that all 3 were dolts in one way or another (c'mon, you must believe that right?). the first one, at dinner in a restaurant announced that he was a vampire. she chuckled but only then found out he was serious and a bit indignant to boot. he told her that he drank blood etc., she got up and left the table. to make a long comment short, the 3rd guy was simply rude and nasty but less obviously strange and she dated and married him. after their divorce and many stories of his bizarre behavior, she admitted that she had arrived home from work on more than one occasion to find him on the living room couch, tears streaming down his face, with a shotgun barrel in his mouth. not long after the divorce she got back together with her high school sweetheart, got preggers, had the baby and ditched the old flame. not sure why i felt compelled to share but there it is. good luck with the boys.

holy crap! that is about all I can say right now...